Drummer WS “Fluke” Holland is known around the world as a true pioneer of American Rockabilly, Country, Folk, and Rock & Roll. His driving “train like” rhythms and innovative rockabilly shuffles are distinctively present on numerous iconic hit recordngs including some of Rock & Roll’s original anthems such as Blue Suede Shoes, Matchbox, and Honey Don’t by Carl Perkins, Folsom Prison Blues, Ring of Fire, I Walk the Line, Sunday Morning Coming Down, Boy Named Sue and dozens of other legendary recordings by Johnny Cash & The Tennessee 3.

His signature beats can be heard on the recordings of artists like The Statler Brothers, Bob Dylan (on the Dylan/Cash sessions that became Dylan’s famous “Nashville Skyline” album , Carl Mann (Mona Lisa, Pretend), Marty Stuart and others. 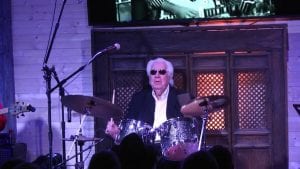 Some of the most revered recordings ever made and recorded during an impromptu session at Memphis’ Sun Records on December 4, 1956 later to be known as The Million Dollar Quartet recordings have the distinction of having Holland on the drums.

When Johnny Cash, Waylon Jennings, Kris Kristofferson and Willie Nelson embarked on tour as The Highwaymen, “Fluke” Holland, as he is affectionately known, was one of the drummers that provided the beat in concerts the group performed around the world.

He has recorded, toured and/or performed with the biggest rock and country artists in the business including Elvis Presley, Jerry Lee Lewis, Marty Stuart, The Statler Brothers, George Jones, Roy Orbison, Chuck Berry and countless others. His most recognized claim to music fame comes as being the only drummer ever for Johnny Cash’s legendary Tennessee 3 from 1960 until Cash’s retirement from the road in 1997.

Considered by many as the World’s First Rock & Roll Drummer, WS was the first artist ever to play a full set of drums on the stage of the Grand Ole Opry. WS Holland has gained his rightful place in American music history. Introduced by Cash himself as “The Father of the Drums” onstage around the globe, WS continues to inspire, entertain and influence other musicians and artists around the world today as he and his band, The WS Holland Band, continues to tour and perform.