The band Exile has recorded hit songs since the early 1970’s. Their hits include the 1978 super-ballad “Kiss You All Over”. During the 1980’s they sent several songs to the top of the charts including “Woke Up in Love”, “I Don’t Want to Be a Memory”, “Give Me One More Chance”, “Crazy For Your Love”, “She’s a Miracle” and several more.

Exile, originally known as The Exiles, is an American band founded in Richmond, Kentucky by J.P. Pennington. They started by playing local clubs which led to touring with Dick Clark’s Caravan of Stars opening shows and providing backup for major rock artists of the period. 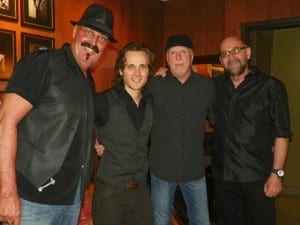 They hit the peak of their success in 1978 with the ballad hit “Kiss You All Over.” After a couple of minor subsequent pop hits, they re-established in 1983 as a country music group. Between then and the early 1990s, the band had several country chart hits, including the Number Ones “Woke Up in Love”, “I Don’t Want to Be a Memory”, “Give Me One More Chance”, “Crazy For Your Love”, “She’s a Miracle”, “Hang On to Your Heart”, “I Could Get Used to You”, “It’ll Be Me”, “She’s Too Good to Be True” and “I Can’t Get Close Enough”.